In the year 2001, we witnessed an unexpected collaboration of artists for the remake of Patti Labelle’s “Lady Marmalade,” which was featured on the Moulin Rouge soundtrack. Some of the best voices and talent of our time came together: Christina Aguilera, Pink, Mya, Lil’ Kim and Missy Elliott.

I remember downloading this song on NAPSTER back in the day and watching “Making the Video” on MTV. This was still when MTV showed programs about music – go figure! As a young girl, I was mesmerized by the glamorous outfits and make-up in this music video, which distracted me from its raw, risque nature. Am I the only one who would have friends over for sleepovers and sing this song? We’d assign each of us a different singer’s part, and of course we all wanted to be Christina!

What was so great about this collaboration was that all these artists dropped their guard and their need to compete. These ladies mostly appealed to the same fanbase (even though we all had a favorite) and ordinarily had to fight for our attention, like on TRL. But in my opinion, they used this opportunity to their advantage and got everyone’s attention by coming together. In 2002, the girls won a Grammy for “Best Pop Collaboration with Vocals.” 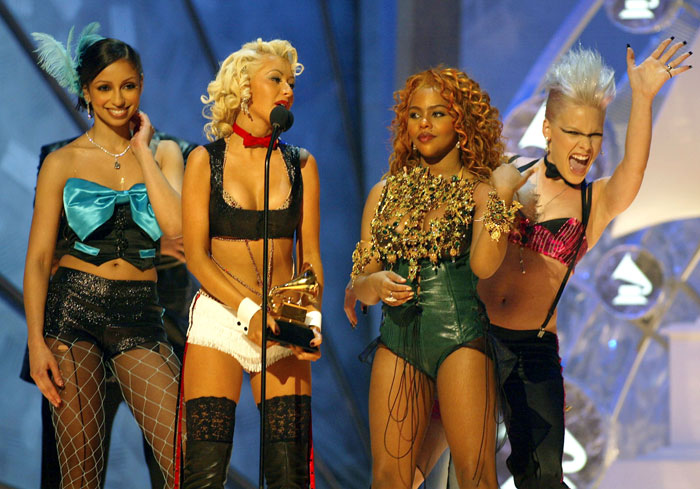 Two years later, Pink also collaborated with Britney Spears, Beyonce and Enrique Igelsias for a Pepsi Commercial that you might remember. Although I don’t have any exact proof, I’m wondering if the successful Lady Marmalade collaboration had anything to do with joining these artists for this commercial. “Lady Marmalade” is one of songs you just have to listen to when it comes on your iPod. I actually rewatched the video before writing this post and I can’t help but notice how much Lil’ Kim reminds me of Nicki Minaj these days. It’s apparent that Nicki was influenced by Lil’ Kim and also Missy Elliott. Just take a look at the video and you’ll see what I mean!